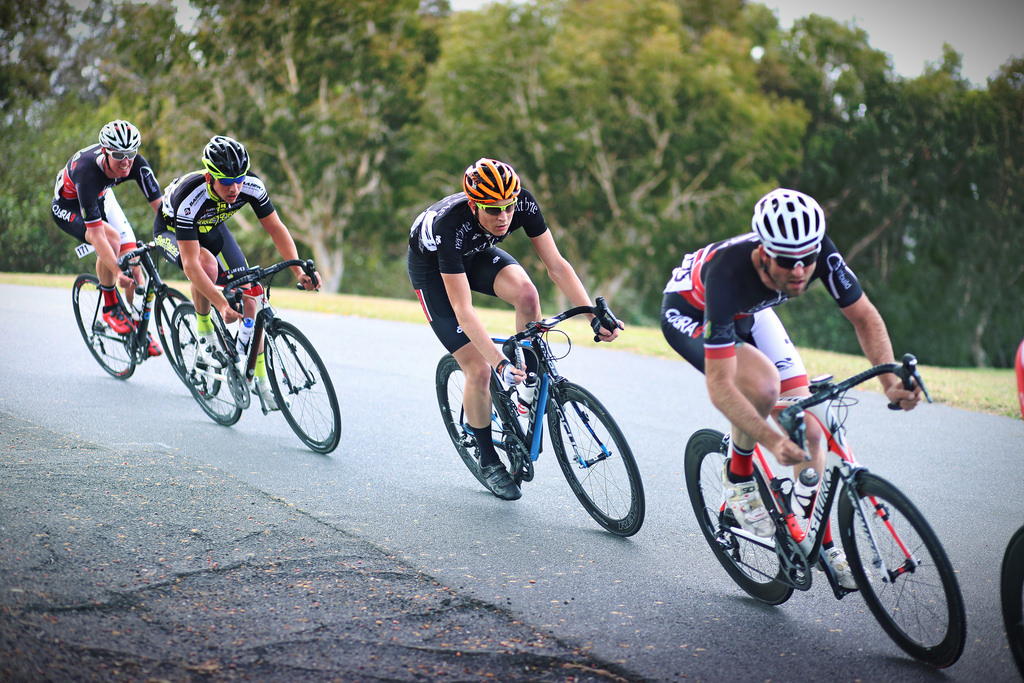 Sunday marked the end of the QRTS season for 2014.   A gloomy morning blossomed into a lovely warm afternoon for criterium racing in Brisbane.  A good crowd was on hand to witness some fast tight racing in the spectator friendly Murrarie circuit.

Threading 100 fit hungry cyclists onto any crit track is always tricky, but the tight narrow Murrarie circuit is particularly daunting.  It is a measure of the bike handling skills of all those involved that the race was able to proceed with almost no incidents.  Within the pack, the level of contact amongst riders looking for a better position is amazing.  Anyone who has never raced in these circumstances would be terrified of coming down amongst the angry peloton.  Despite the occasional angry exchange, by enlarge, most of the lads understand the nature of tight racing and are forgiving of their peers in such circumstances.  Holding your line remains the golden rule.

For Cobra9 Intebuild racing, today marked our last chance to improve on our performance in QRTS14.  We have had a series of tough lessons over the year culminating in a our crash riddled race at Gatton.  Our top finishes have steadily improved over the season with each round bringing improved results.  At the team meeting before the start of the criterium, we were determined to have a real crack at the win.  Forget the primes, forget the breakaways, go for the result.  All the lads rode for Matt Ryan knowing how well he can finish.  We were all assigned roles, and were determined to have an impact on the race.

As expected, the first 10 minutes were quick.  Essentially, non stop pace line 48-50kph quick.  All you can do is push to the front and stay out of trouble.  On a narrow track like Murrarie, there are not a lot of opportunities to move through the field.  When you get the chance, you have to take it and put the hammer down.

After the opening salvos had been fired, most of the race was spent roving around the front, keeping an eye on the breaks and keeping Matt Ryan near the front of the bunch.  No sooner had you performed your duties, then you had to do them all over again such is the swarming nature of crit racing.

As the race neared its conclusion, positioning becomes crucial.  Anyone who thinks a sprinter just gets to the end and puts the hammer down has no idea just how difficult and dangerous those last few laps are.  Watching Matt hold his spot in the line despite all sorts of pressures from swarming riders gives you a different perspective on just how courageous you have to be to hold your spot.  The sprint in some ways is the easy part, the preceding 5 minutes is where most of us loose out.  If you aren’t in that first few riders when the sprint opens up, then it’s all over.

Matt almost got the perfect ride in the end.  As he rounded the final bend he kicked hard and just missed the podium finishing in 4th position.  Taking the outside line meant the 10cm he missed out by was probably due the the extra track he had to take to get to the line.  Anyone who has been following us this year knows how hard Matt can kick which puts the efforts of Jesse Kerrison from Budget Forklifts into perspective.  The result makes us hungrier for next year.  We want that podium spot and maybe even the best Master’s rider jersey which has been in lock down at Anthony Collin’s boudoir for the last few years. 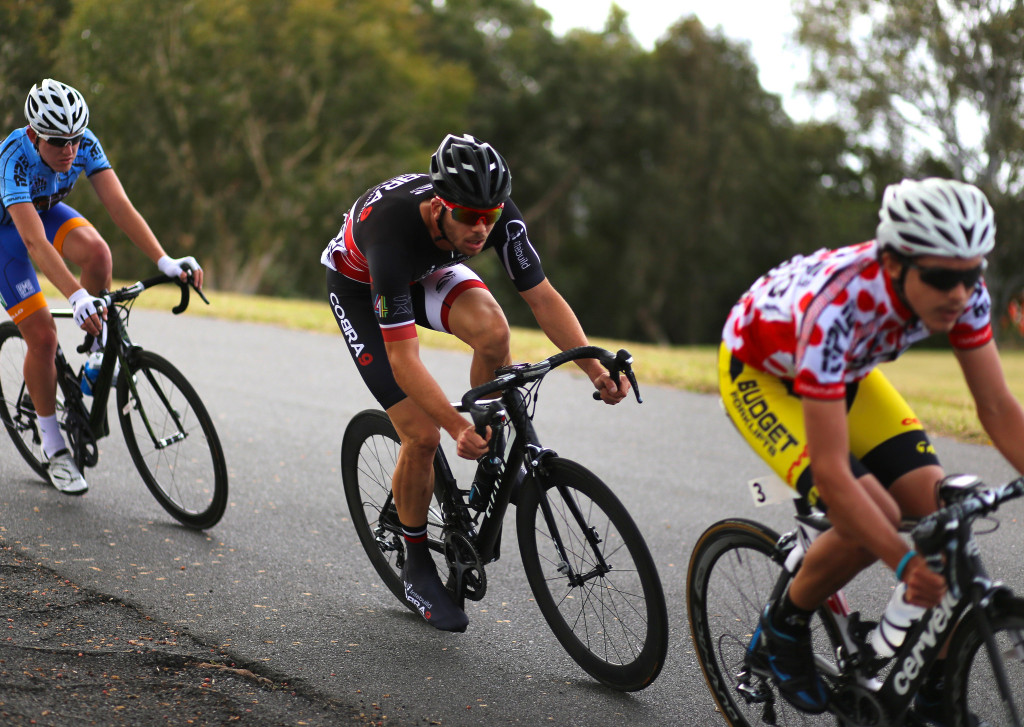 All the lads did their jobs on the day.  Matt Zaranski finished top 30 and proved he is getting stronger every race.  The rest of the boys were held up in the crash on the last lap but at least no one was injured.  Everyone took turns to help out Matt Ryan and the result was a tribute to their endeavours.

We have come a long way this year.  The team’s performances and standing from our 1st round have improved enormously.  We have developed a strong unit of lads who ride for their brothers and suffer without complaint.  There is no question we have bonded over the course of the long season and our results are a testament to that.  Look out next year where we will look to take it up a notch.

Thanks to our sponsors for their input, help and support.  Danny from the Powerstation Cafe got the gig for the last round and served up the same quality brews he has been serving up to us all year long.  Brett from Megabar was on hand to watch the lads consume the fuel he provides.  His energy bars are incredible and we are lucky to have a perfectionist in our corner when it comes to our nutritional needs.

Our head sponsor Intebuild Building Solutions under the impetus of Steve Leitch have been in our corner all year providing invaluable assistance and support without question.  Dion from 4shaw has been pimping our socks all year and he has been a long time supporter of Cobra9 since our emergence in 2009 in the windy streets of Hobart.

The team from Land Partners have come on board over the course of the 2014 season and chipped in with much needed support.  We look forward to strengthening that partnership next year.  Peter from GC Bike FIt has been helping the team all year with fitting and mechanic duties whilst providing regular comic relief.  His well versed input has been invaluable to our fledgling team in 2014.  We look forward to him racing in our colours next year,

Wurkstand provide us with the king of work stands.  Proper boss.  Seight custom have hooked us up with the best looking kit in the peloton.  Period.  We can’t fault the quality and pop of their kit.

Thanks to all the team members who have raced for us this year and to their families who release them into our Cobra9 Intebuild family for the weekend.  Without their sacrifices, their would be no C9 Intebuild.

Lastly, a huge thanks to Dugald Macarthur our director of racing this year.  Dugald has put in a huge amount of work on the logistics, operation and planning for every round.  He has also had to make some very tough calls over the course of the year which is largely a thankless task.  He most certainly is the calmative agent to my uncurbed enthusiasm.  He agreed to the role on the proviso that he would also be allowed to race.  The same promise is on the cards for 2015.

There is still a lot of racing in store for Cobra9 Intebuild with state titles, nationals and one day classics on the cards.  You can catch all the info here, at cobra9.com.au.

Well, what a weekend.  The World Champs were well beyond my greatest expectations.  The informed nature of the crowd, the unanimous support […]

Big thanks to Rocco and the guys at Austral cafe for great coffee and plenty of carbolicious food. We would highly recommend […]

This year’s Metropolitan Championship road race was conducted in near perfect conditions at Mount Alford, outside of Boonah. Cobra9 had a small […]

Only a week to go and it’s now officially to late to get some form. The best one can hope for is […]