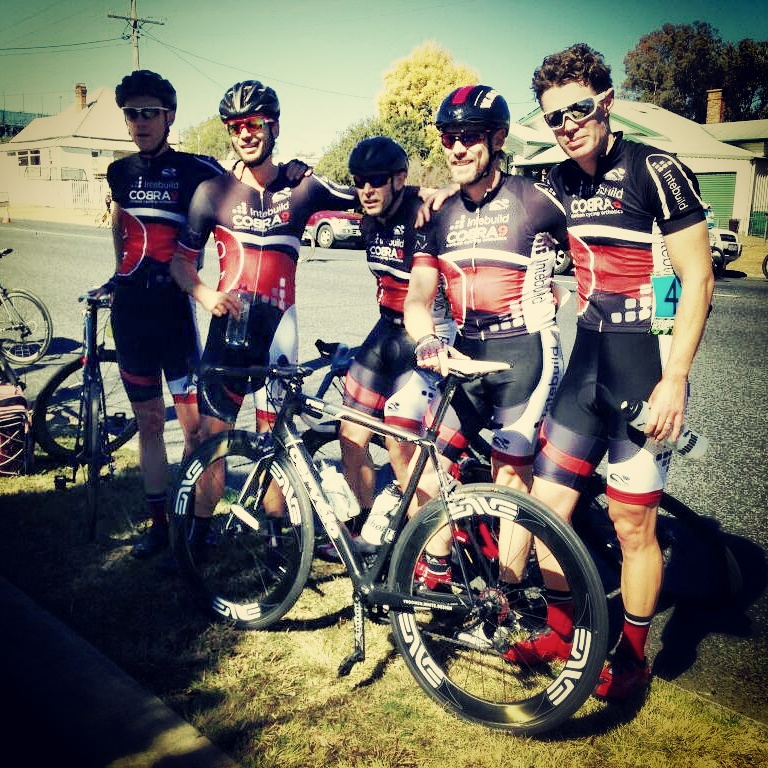 Queensland’s only point to point race is also one of it’s hardest.  The climb up the Great Dividing range provides a few challenges but the exposed dead roads harassed by the epic cross winds is what makes it a proper suffer fest.

We fielded a strong 5 man team for today’s edition (just – a technical error had us arrive just in the nick of time).  The team consisted of Matt Zaranski, Matt Ryan, Tim Dalgleish, Nathan White and Adam White. All the boys are feeling pretty strong at the moment and were looking to get involved in today’s edition.

The race had only just kicked off and Matt Zaranski had jumped into an early break with TLD rider Trent West  The two strong men kept the field at bay for 50 kilometres until they were finally caught after the KOM.  Matt narrowly missed out on getting the KOM jersey but there was no question it went to a well deserved winner in Trent.

At this point in the race, the cross winds come into play.  The remaining riders in the bunch who had survived the climb then split in two under the relentless onslaught from the southerly buster. Each turn in the road would string the bunch out and shake a few more riders from the tail of the peloton.  Adam and Matt Z found themselves in the second bunch on the road and worked tirelessly to chase back on.  Matt’s heavy legs from his earlier efforts were being tested to the limit. The two boys would eventually make their way back on with about 30 kilometres to travel.

Up front a few riders separated themselves from the main bunch in search of a tough break away victory.  Principal to the movement was most impressive rider Tony Simonelli (Data#3).  With 20 kilometres to travel the break away group had a gap of around 30 seconds.  With Matt Ryan cooling his heels in the bunch, we needed to bring it back.

For the remainder of the race, Tim, Adam, Matt Z and Nathan rode on the front bringing the lingering riders back to the bunch.  It made for a grueling end to a long day but riding for your team mates gives you a little extra to keep pulling those hard turns.

At the last corner, the catch was almost complete.  At this point wily Allan West from Erdinger dropped the hammer.  Matt Ryan jumped on his wheel and then had to push hard up the finishing straight to pick up the win.   It was a tough win but well deserved after the days toils.

Big thanks on the day to all the boys who turned themselves inside out to ensure the win for Cobra9 Intebuild.  Special thanks also to team driver Abbie who sacrificed her day to hand out bottles and put up with our war stories.

The sponsors all play a big role in these victories.

A great day of racing at the Queensland raceway last Saturday.  The first time on the track for most of the guys […]

Well the wait was worth it.  I have been looking forward to testing myself in this race for a few months and […]

Backing up is always hard to do. The pain from yesterday (heart rate 195bpm) is too fresh in the mind to convince […]