We headed to Gatton for round 4 of the QRTS with quiet positivity after our strong showing in the last race in Kingaroy.  A couple of the lads fancied themselves in the individual time trial and the road race parcours seemed to fit our strengths.  All good then.  What could go wrong?

The wind was up for the Saturday playing havoc with disc wheels and aero positions.  Amongst our crew for the race, Tim and Matt were our strong chance for a top 30 result.  The early times suggested that the conditions were making for slower averages then for previous years.  Our front marker Dugald went to battle on his roadie and knocked out and impressive 23 minutes as a marker for the boys.  This result made even more impressive considering I had pinned his number through his arse cheek beforehand with only the cold southerly winds preventing us from being alerted to this fact immediately.  Later inspection did confirm his increasingly porous state.  An omen maybe.

Tim duly went out and busted the course open with a cracking time of 21:30 to set us up for a good result.  Being the TT specialist that he is, he wasn’t entirely satisfied with the ride and felt he missed his power numbers.  Still a ride good enough for 16th overall which was the fastest masters time and our best result of the year thus far.

Matt Z, fresh from a month of training at altitude in Europe was next off and pushed out an impressive 22:30.  Not too shabby for a jet lagged rider who had places to be.  Indeed as soon as the ITT was concluded, Matt hastened off to give the first speech as his friends wedding with his 28th position in the ITT a more then worthy contribution for the weekend.

Rupert put out a strong ride on his roadie to finish in the top half of the field but outside the points.  Adam was off next and made no secret of his mission to roll around the course and save his legs for the afternoons shenanigans. 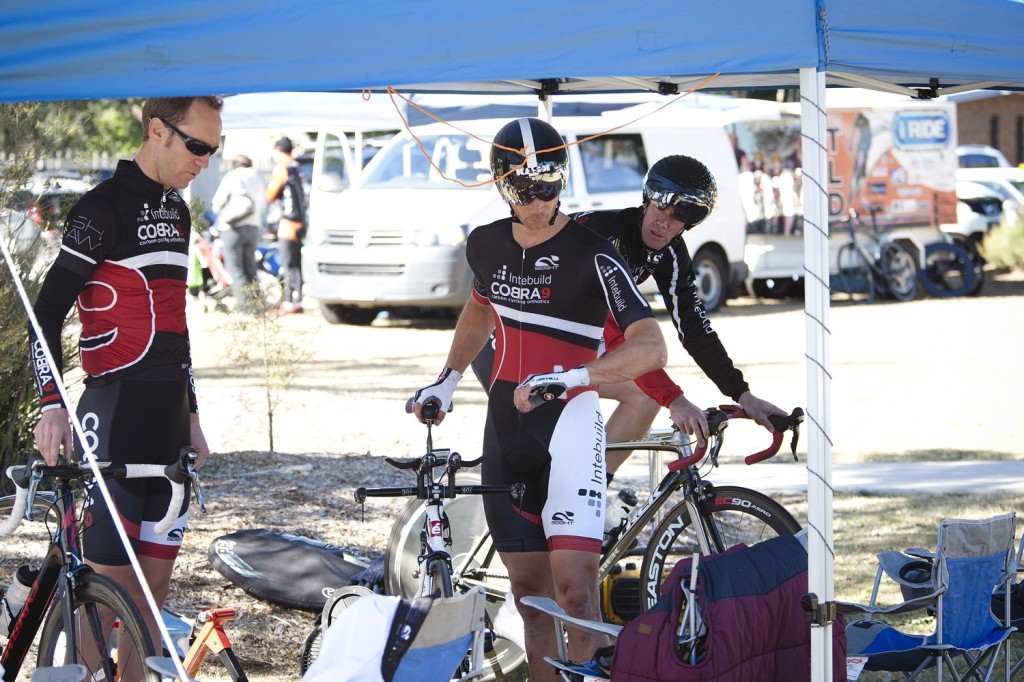 I was up last and was hedging my bets.  If I was on time at the halfway point for a result, I’d push to the end.  Otherwise, I’d shut it down and save the legs for the afternoon race.

Individual time trials are unique events.  Inside the quiet of your TT helmet all you can hear is your breathing and your heart racing at the start line.  When they let you go, you body screams at you to release the shackles and go as hard as you can.  It takes a few time trials before you manage to quieten these presumptuous voices.  Once you’re into your rhythm, the event is essentially an episode of managed suffering.

It’s pure.  There is no shared blame.  You own the outcome completely.  I can see why these events can be addictive because they are a true test of your ability to suffer and get the most out of your body and bike.  On this day, the early portion of the course was quick with a blustery tail wind.  The rest of the course proved to be a battle against the elements.  At the halfway point I was on time for a 22-23 minute result so kept pushing on.  My saddle had slipped down on me but I felt otherwise good.  The last few kilometres were brutal into the cross winds.  Even though I have chosen to ride the roadie, the disc wheel on the back almost took me into the bushes on a few occasions.  In the end, I finished around the 23 minute mark and mid pack which was not too bad but left me hungry to work harder on this element of my racing.

The two top 30 results pushed us up the standings on the team ladder.  We lost Matt to a wedding for the afternoon but we felt pretty upbeat going into stage 2.  The stage was won by Jordan Kerby (Brisbane Camperland) in a storming 20:03.

The road race was a repeat of the mornings time trial course with 7 laps proving to be a test of attrition.  The wind was playing havoc and keeping to the left on the roads proved difficult.  Eventually the race was stopped and a stern warning was issued from Cycling Australia.  Once under way again, a break formed on the 2nd lap and the enigmatic Tim decided he needed to involve himself in some further suffering by placing himself in it.

The small breakaway group was comprised of a few riders from Budget, TDU, Data#3, GPM Next Byte and Tim from Cobra9 Intebuild resplendent in his Aussie bands.  The pace up front was hot and the group cleared away to a 3 minute gap.  The assaults from the Budget lads dropped a few riders from the group and this in turn upped the impetus of the peloton to chase.  Once the Data#3 rider was dropped, it signalled an all out assault on the break away which was duly brought back on the penultimate lap.  Tim slipped effortlessly through the field after being caught and his day was over with some huge energy expended in the break.

Back in the peloton, the numbers were dwindling under the tactics of Data#3 and the the impact of the omnipresent cross winds.  With 3 laps to go a crash at the back of the bunch separated 3 of our riders from the pack and despite attempting to chase back on, their efforts proved futile.  Adam, Rupert and Dugald wound it down for the day and set their eyes on Sunday’s race.

I had no idea I was the sole remaining Cobra9 Intebuild rider in the bunch as at the same time, my rear tyre started to feel decidedly spongy.  After nearly rolling it off at the start finish line, I decided to stick my hand up and opt for a spare.  It’s always tough to chase back on after a flat but a series of hiccups with the team car ensured that I spent an entire lap chasing furiously to regain the group.  Thankfully the legs were working well and the adrenaline was flowing. 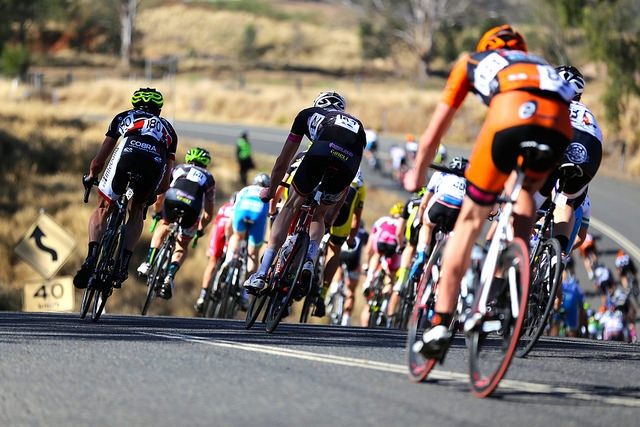 I finally caught the bunch at the start of the final lap after 20 kilometres of chasing.  Unfortunately, none of the team cars were aware of my predicament and rather then allowing a passage through the vehicles back to the bunch, I was treated like a dropped rider and left in the wind to battle back the last 100 metres.  When you have spent all your energy getting so close, to be left stranded off the back was devastating.  In any case, the peloton gently slipped out of my reach and I duly finished off the back in about 50th position.  That’s racing. Could be worse.  Sunday would prove that in spades.

Up front, Jordan Kerby (Brisbane Camperland) won in a sprint against some of Australia’s best young talent proving that backing up from the ITT isn’t so bad if you have the legs.

The winds had died down from yesterday and the winter warmth returned to the Lockyer Valley.  A very lumpy 5 lap circuit was going to favour those that liked the punchy climbs and could hang tough under the repeated assaults by the bunch.  After setting off at a brisk pace, the peloton settled into a firm tempo on the first lap.  As often happens early in a race with a large field, a sniffle up front turned into a full blown cold by the time it reached mid pack.  The first sign of impending doom was a TLD rider hitting the anchors and slamming into the bitumen about 10 metres in front of me.  With nowhere to go, I duly parked my bike on the bitumen and landed heavily on a few startled downed riders.  It all felt like slow motion as your brain recognises there is no option but to go down. 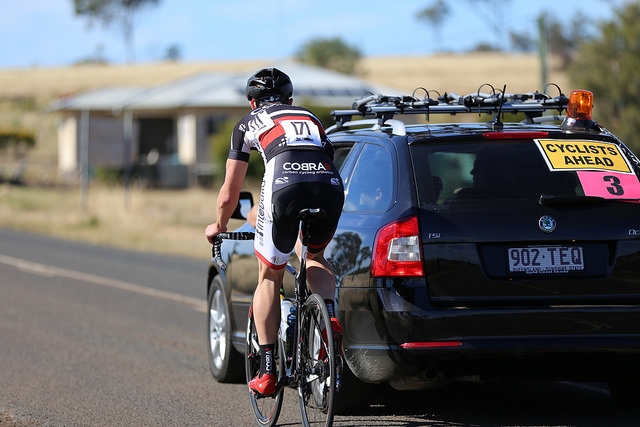 Luckily I managed to escape with only a few scrapes and some twisted handlebars.  Adam came down more heavily and added to his collection of shoulder wounds but was also able to continue.  The TLD rider was not so lucky and was escorted to hospital with a punctured lung.

Once back on the bike, the body readies itself for a solid period of motor pacing with the idea returning to the bunch before your race is prematurely over.  I set off with one of the lads from Mipela Altitude and we soon found ourselves punching along at 50kph in pursuit.  As we turned towards the hills disaster struck when the team car edged closer to me  and the next thing I remember was cart wheeling down the embankment.  This crash did some real damage to myself and the bike.  My elbow was shredded and my rear derailier was bent beyond repair.  My day most definitely over after a poultry 10 kilometres of racing. The team car did a solid job patching me up on the roadside and I limped into the back seat for a ride back to the Ambulance.  The crash was unfortunate but is all part of road racing.  I don’t blame anyone for the incident and feel lucky to have escaped with some stitches and the usual epic road rash.  Thanks to everyone who wished me well on Sunday from all the other competing teams, and also to those close to Cobra9 Intebuild racing.  I hope to be on the bike again soon.

Adam managed to chase for a lap but when it was confirmed that he was still 5 minutes behind the bunch, decided to call it time on what for him was a very frustrating weekend.

In the bunch, Tim, Dugald and Rupert battled on in earnest.  With a lap to go a small group of 17 riders lay ahead of the chasing peloton by less then a minute.  Tim bravely tried to escape the peloton on the last climb but was brought back by some healthy chasing.  All three remaining riders finished in the peloton but outside the points to cap off a frustrating weekend that had promised much after the early time trial.  Great rides by Dugald and Tim in the main bunch gave them some of their best road results of the year.  Dugald in particular has been riding in solid form for the last few months and I’m sure a big result is just around the corner.  Stage honours went to Sam Volkers (TDU) who deserves this win after putting in a mountain of work on his riding this year.

We have learned a great deal this year in our first outing in the Queensland Road Team Series.  In these last few rounds we have also been reminded that road racing is at times a dangerous sport and we have been lucky to have had only a few scrapes to show for this year’s endeavours.  The final round is the Criterium at Murrarie in August and although we loose our Panzerwagon Tim to the World Time Trial Champs, we will welcome the Criterium monster Matt Ryan back into our ranks for a final assault on the team standings.

Thanks to everyone who helped out in Gatton including the one armed Pete Spencer from GC Bike Fit and Adam Weathered who presided over his first race on team duties.  Thanks also to the masses of support staff out on the roads and the Ambos and medicos at St Andrew’s Hospital who patch us up when we go flying.  Until next round, it’s a very sore and sticky goodbye.

Big ups to our Sponsors

Well it’s over for another year.  The Mt Wellington challenge was held under blue skies with warm sunshine beaming on all those […]

Congratulations to Cameron from Hobart who won our Christmas Cobra9 SemiPro give away.  A fitted Cobra9 SemiPro, Cobra9 socks and Musette are […]

A recent training ride ended with me descending a little too quickly and without my bike.  A pair of torn Cobra9 bibs, […]