The dust has settled on the Battle on the Border for another year and we can safely say that its been the most successful foray yet for team COBRA9 Intebuild.

Proceedings kicked off with an 80km road race over familiar roads around Tyalgum and Teranora albeit in the opposite direction to previous years. There were ominous signs early as the gathered field cast their eyes skyward and willed the clouds away to no avail. Within 10km of the start, and hurtling toward the first of two KOMs for the day, the heavens opened and drenched the field in a matter of seconds.

On narrow winding roads, with the occasional oncoming vehicle, it was white knuckle stuff as the peleton careered into the first climb, teams jostling for position on the front and out of harms way. The field stretched and snapped as the pace went on for first KOM points Ben Mason first over the top, followed by Andrew East. The full complement of C9 Intebuild riders managed to navigate the KOM and slippery decent, to re-group with the main bunch as the pace continued into the first sprint point of the day. We were under prepared and did not manage to contest the joust that was subsequently taken out by Mark Laspina.

Racing continued through the cane fields, towards the slopes of Teranora as the wind and rain set in again, lashing the now reduced peleton, with hail sized droplets. A number of riders tried their luck off the front of the bunch but insistent pace was not allowing anything to stick. Tension began to build again as we approached the final climb(s) of the day, located near enough to the finish to offer a small selection the chance to stay away for the win. There were hand signals from the front and the commissares vehicle slowed to a stop, putting a halt to the racing. There had been a crash in another grade on the decent from Hogans Rd and we were to wait until the road was cleared and safe for racing. This respite allowed a number of riders to regroup with the main bunch and consternation ensued as the officials attempted to demarcate and record time gaps to reinstate when the race resumed.

Racing finally resume and in what seemed like minutes, the road began to turn skywards and there was an aggressive move off the front from Rapida’s Ben Mason. We were on the slopes of the second “Hogans Rd” KOM and the peleton settled into the climb. Splits began to appear and the bigger men of C9 Intebuild started to drift back through the bunch with the smaller men weaving their way forward, through the carnage. A small group of about 5 had formed at the front of the climb and I set my sights on them as the climb continued.

Unbeknownst to me, Matt Z had suffered the first mechanical of the weekend with a loosening rear skewer and was forced to dismount and adjust, or risk coming off on the descent. I dug deep and pushed towards to the top of the climb, with the front group now only 80 metres ahead and cresting the KOM, this time with Andrew East over first for maximum points. I crested the KOM and began the sinuous decent with the remains of the main peloton trailing behind, as yet unaware of what had ensued behind. The thin line of riders snaked down Hogans Rd and safely through the concrete culvert that had been the undoing of the previous race. My rear hub was emitting an unearthly scream on the descents, as the speed kicked up above 50km/h, forcing me to pedal to avoid free wheeling. The roads had clearly taken their toll on the machinery and I just needed it to hold up for the last 10km to the finish.

The road kicked up again, this time more aggressively with pitches of 12 and 13% and the remnants of the bunch fanned out across the road and took stock of who had made the selection. I looked around and noticed the familiar figures of Dugald, Tim and Matt Ryan, battling up the series of climbs and realized that we were in with a good chance in a sprint finish. There was the small matter of a 5 man break that needed to be taken care of first.

With the last of the climbs was behind us we plummeted toward the flat cane fields ushering us to the finish, still with 4 men intact. I followed Dugald to the front and started the chase in earnest with some willing support from Mainline and Lifecycle. We were picking up the remnants of the break, one at a time. When we reeled in Stuart Wilkins, I looked over at Matt Ryan who was starting to anticipate a sprint.

There was a bang and the familiar sound of a crash behind as 2 tired men went down. We raced on and Dugald suddenly swung off and stopped pedaling suffering a mechanical. We were down to three.

The last of the break, were hanging on tenaciously and we were approaching 2 km to go. Into the final corner, there was only 50 meters separating us when Ben Manson kicked out of the break for the line. The bunch heaved and rolled as the big men fought for position and charged for the line. I strained to see Matt Ryan’s fist raised in triumph on the right side of the road – first blood to COBRA9 Intebuild.

After two full days and three stages of hard racing, we gathered on the start line at the Salt Resort, Kingscliffe for the final 80km that would decide the outcome of the 2014 Battle on the Border. Buoyed by the success in the criterium the afternoon earlier, moral was high in team COBRA9 Intebuild as we warmed up for the final time.  We had Tim in 1st and Matt R in 2nd overall heading into the stage. All that remained was to defend the lead and maybe contest the intermediate sprints to have a crack at the green jersey as well.

Proceedings kicked off with a flurry of attacks from the gun that the boys duly countered with the team prominent at the front of the bunch. Before long, we were approaching the first sprint of the day and the pace was hotting up. Matt Z jumped on the front and lifted the pace to string out the peloton into the sprint point. Matt Ryan duly finished the job – one from one, things were going according to plan.

The course headed south and over Moon Rise, the first significant climb of the day and the wheels started to fall off. Tim punctured so Dugald stopped to swap a wheel with Nathan and Matt Z also waiting to lend assistance. Meanwhile, further forward in the bunch I was blissfully unaware of the drama unfolding behind as I marked the activity off the front of the peloton. The news of the mishap went through the bunch and the pace seemed to lift. We were nearing the Burringbar range, the first KOM of the day so there was no time to think much about what was happening behind as a series of riders were looking for an advantage into the climb.

We hit the climb at pace and I had not seen any of the C9 Intebuild crew for some time.  All that could be done was to attempt to disrupt the rhythm of the climbers in an effort to slow the pace in the hope that the boys were back in the bunch. Ben Manson set the pace early and I locked onto his wheel with the race stretched out behind. Half way up the climb he swung off for someone else to take up the pace making and Andrew East attacked. The bunch quickly splintered into threes and fours, battling their way up the climb. Andrew took the major points over the climb and we plummeted down the other side, using the full width of the double lane road for the perfect line. Matt Ryan careering past on the downhill was a welcome sight – we were still in with a chance for the overall. Scottish had not made it, and subsequently flatted so it was down to the two of us for the remaining 30km.

We raced through the final sprint point and Mark Laspina took the honours, which left the final KOM over Farent’s hill, and the flat run in to the finish to navigate. There were now only about 30 or so riders left in the bunch and the attacks started as we headed through the cane fields towards the climb. I defended where I could and we hit the climb all together. The gradient maxed out at around 7% so the pace was hot and once again East accelerated away. We rode a solid tempo to get Matt over the top in touch with the lead bunch and the group came back together down the other side – nearly there! 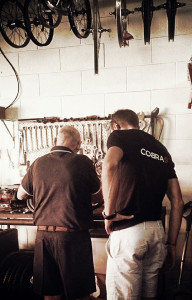 The efforts of the day were starting to take their toll as we raced towards the coast.  We were still on the front trying to close down another attack from the Tineli team.  We hit the left hand turn and into the wind for the final blast up the coast to the finish. Duncan Crosby from Tineli was still dangling about 150m off the front and I was gritting the teeth knowing that the other fast men in the bunch would be starting to wind up for the finish if we could hold on a little longer.

We headed right off the main road and through the roundabouts leading into Salt resort – the pace was well and truly on now and I was happy to sit on the back and hold on, knowing Matt R was in among it. Up the rise and into Salt – home and hosed. I sat up and pedaled around to the finish, trying to catch sight of the sprint, only to roll past Matt, picking himself up off the ground and gingerly getting back on the bike after going down as the rider in front hit a hay bale… There was no final stage victory to make it a clean sweep but he finished on the same time, which was enough to retain the overall lead – phew.

The rest of the team came home in the following bunches and the events of the day were slowly pieced together into an epic tale, embellished with each retelling.  COBRA9 Intebuild takes out three stage victories from four, plus the overall. That’s a good story, no matter how you tell it..

It’s a rare day when your focus from patients is interrupted by a flurry of lycra whizzing past your window.  Today at the head […]

A perfect morning to celebrate Tom’s win at the Tour of Flanders overnight. The loss of Fabian will be felt over the […]

Frantic finish into a headwind with a race to last corner. Some near misses in the bunch but still a good sized […]

This year’s Metropolitan Championship road race was conducted in near perfect conditions at Mount Alford, outside of Boonah. Cobra9 had a small […]