Well it’s over for another year.  The Mt Wellington challenge was held under blue skies with warm sunshine beaming on all those who took to the hill.  The few hundred cyclists who took part probably enjoyed this element for a few minutes before the lactic burn took hold.  It’s a wonderful sight looking up the road (literally) and seeing so many cyclists fighting their bikes, themselves and a lumpy uncompromising mountain.  Enough head movement and pedalling in squares to keep a SBS commentator in a job!

Unlike most time trials, the Mt Wellington Challenge is more about personal bests and as one elder statesmen puts it ‘ETP – Enjoying The Pain’ rather then beating your fellow cyclists.  Admittedly the 15 second starting interval time tempts the newbie into chasing down the distant figure wobbling in front of them, but this is fraught with risk.  Personal experience with this option has taught me a painful lesson.  The time for this lesson is usually around 15km’s later with the 10% gradient rising unrelentingly up at you and your quads exploding into your top tube.  Generally this is occurs simultaneously when that slow and steady cyclist you passed half an hour ago spins by you in slow motion. 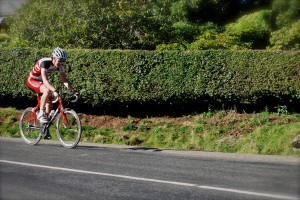 At this stage you get out of the saddle only to discover you have suffered an unusual lower hemisphere stroke and are unable to feel anything below your navel.  There is no sorrier sound than a rump slapping unceremoniously back into the saddle after your futile attempt to pick up the pace. Sound like fun, well it’s on again next year and I’ll be back once more to ETP.

For Team Cobra9, Jimmy, Chris, Ben and myself rocked up to test the legs and new theories on how to get the most out of ourselves.  We managed a few P.B’s but the overall feeling was that the Mountain won again.  Congrats to young Campbell Flakemore for smashing his way up in there in around 52 minutes.  Only a few minutes outside the race record held by some punter named Richie Porte.  Haven’t seen him around for a while… 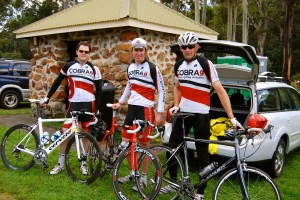 Thanks also to the organising crew including the Hobart Wheelers Cycling Club and others who put on a sensational day.  Congratulations on all who entered and had a go.   We may all finish with different times, but we all suffer the same!